One of the questions I had during a feedback session was on PKA, hormone-sensitive lipase (HSL), phosphorylation and perilipin, and how this all relates to the breakdown of triglycerides.

PKA phosphorylates HSL and perilipin. However, for PKA to do that it has to be active, that is, cAMP needs to be available to activate the kinase (see figure 1). 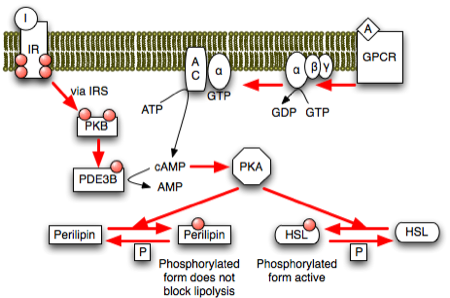 Figure 1: Regulation of lipolysis. Activation of a G-protein coupled receptor (GPCR) by a hormone (A) (e.g. glucagon) or catecholamine (e.g. epinephrine) causes an exchange of GTP for GDP on the α subunit of a heterotrimeric Gs protein. The active GTP bound α subunit activates adenylyl cyclase (AC), which converts ATP to cAMP. cAMP activates protein kinase A (PKA), which in turn phosphorylates, and therefore activates, hormone-sensitive lipase (HSL), and phosphorylates perilipin and removes its 'block' on the fat droplet. Net result: increased lipolysis and hence the production of fatty acids and glycerol. The activation of the insulin receptor (IR) by insulin (I), via insulin receptor substrate (IRS) and a number of other proteins, results in the phosphorylation of protein kinase B (PKB), which in turn phosphorylates and activates phosphodiesterase 3B (PDE3B). The active PDE3B hydrolyses cAMP to AMP, and therefore effectively lowers intracellular cAMP levels, therefore reducing PKA activity. As phosphatases (P) are removing phosphates from HSL and perilipin there will be a decrease in phosphorylated HSL and perilipin as PKA is not replacing the phosphates. The net result is less HSL and perilipin is phosphorylated, so lipolysis is reduced. 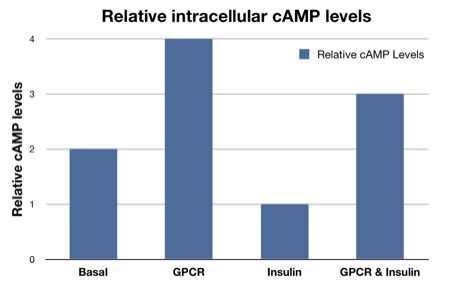 What you have to remember is these systems are dynamic and in a state of equilibrium. cAMP is being made (adenylyl cyclase) and destroyed (PDEs). Kinases will be putting phosphates onto proteins, and phosphatases will be removing them. All that is happening is this equilibrium is being changed and pushed in one direction or the other, active or inactive, phosphorylated or not phosphorylated.