In a moment of madness, I decided to make an email Christmas card...  Sounded like an easy task, but wasn't.

First thing I need to do was come up with a design and I decided to go for a simple image and message, but then there was the question of the image...  Ideally, I wanted something unique (hence all the stock images of dancing Christmas trees were out), and something that looked modern and worked on desktop, tablets and smartphones. What I needed was a homemade animated gif that was in a reactive design ('reactive design' means that the design adapts to the screen size.  Easy huh? Well, no... 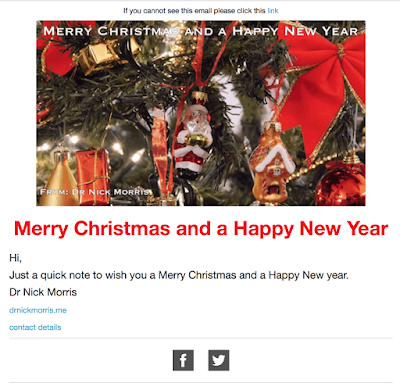 Basically, there were X parts to the problem:

For this, I just use a camera mounted on a tripod.  The tripod was needed as the final moving image was going to be a looping animated gif so the image frame needed to be steady.

I decided to record a 10-second clip of the flashing lights so as to at least catch one complete cycle. 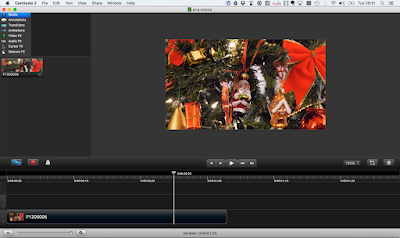 Using the program I was able to trim the original 10 seconds down to a 1-second cycle of the flashing lights. 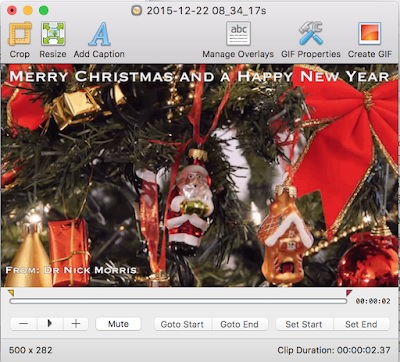 I knew that to make the card I would have to write it in HTML (which I know), but I had to make the email 'reactive' so that it was readable on desktops, tablets and smartphones.

Reactive design is not new, and it is something I have done in the past, but it can be tricky, especially when dealing with email, as opposed to browser, clients. Basically, the way a reactive design works is that the layout and sizes of elements on the page are adjusted for the best look on the available screen space. That is, the design 'reacts' to fit the device.

When producing a reactive design there are two approaches that you can take. You can either hand-code the design, which can be hard work and very difficult, or you can use a program. For the card, I opted for Responsive Email Designer, which whilst it did the job did have a rather steep learning curve. (I also looked at Mail Designer Pro 2, which was easier to use but lacked in fine control, that is, you couldn't directly tweak the underlying CSS.) 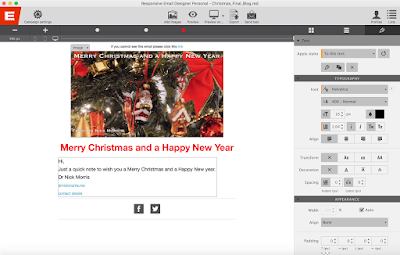 Of the two programs I looked at Mail Designer Pro 2 was the easiest to use (most Mac-like), and was particularly good for entering the text, but weak on layout control, whereas Responsive Email Designer was excellent for layout, but truly terrible for entering text, and had some really annoying interface quirks.

I tried viewing the card as a webpage and then using the built-in feature on the Mac to email a webpage, but that also broke the responsive design.